Home Blog Interviews with the Authors An Interview with Scott Thornbury 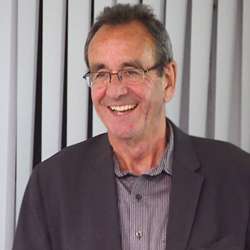 Scott Thornbury and The Communicative Revolution

Scott Thornbury is a writer of many of the books recommended by our teacher trainers for the CELTA and Delta programmes. He also writes for many blogs such as www.deltapublishing.co.uk/author/scott-thornbury, and including his own, one called the De-Fossilization Diaries www.scottthornburyblog.com  and www.scottthornbury.wordpress.com. When he isn’t writing and collaborating on books, he is blogging, posting or speaking at conferences all around the world. He’s a busy guy!

But most importantly for me, he’s a revolutionary and a critical thinker who puts words into action to effect change on the ground. He and colleagues like him make English language teaching and being an English language teacher more than just a life-style choice for a few years while you’re young and want to travel.

Scott Thornbury is critical of the commoditization of English Language teaching, where learners are turned into numbers, class content becomes exam orientated, and teachers become fossilized exam preparation machines teaching their students how to jump through hoops.  He turns us back to teaching as vocation. Talking with him, listening to him, reading his work and reading the books that have inspired him inspire us to be better teachers, critically aware of the impact teachers have and can have in the lives of their students day to day.

Published Books in our Bookshop

Scott Thornbury: A glance at my bibliography would suggest that my main interest is grammar – I have written (or co-written) five books with the word grammar in the title. In fact, this is misleading. I’m really more interested in teaching – in methodology, in fact – and grammar teaching just happens to be part of that. So, too, does the teaching of vocabulary and of discourse, both of which I have written about.

A quick list of some of his books we have here in our bookshop recommended by our trainers:

In CELTA and Delta programmes, we acknowledge that one size doesn´t fit all.  Many teacher trainers are trying to address that in their teacher training courses and move teacher-trainees away from coursebook-centred teaching. I’m particularly interested to know what influenced your approach to teaching.

Scott:  I suppose I was always interested in an alternative, more humanistic education, especially since reading Earl Stevick’s A Way and Ways in around 1980. I was also influenced by reading Teacher, by the visionary New Zealand educator, Sylvia Ashton-Warner.

Emma: I was also very influenced by this the book “Teacher” and it remains a part of my bookshelf wherever I am in the world.

Scott: “A political dimension was added by reading Paulo Freire, critical theorists such as Girault, and “subversives” such as the late Neil Postman (his book, with Charles Weingartner, called Teaching as a Subversive Activity, I read around 1986 and it was very influential).

I had “grown up” as a language teacher in the mid to late seventies and experienced the transition from a very form-focused, regimented kind of teaching to the (at the time) totally liberating communicative revolution, with its emphasis on authenticity, meaning, interaction, and so on.

I was lured overseas to Egypt, where a new IH affiliate had just opened in Cairo.  I tried to implement these principles. We were situating the content of lessons in the lives and culture of the learners.

Later as a trainer in Barcelona this was extended. We found that one of the blocks to effective communicative teaching seemed to be an over-dependence on published materials and aids, and so we tried to encourage our trainees to “make more out of less” and to cultivate a learning context based on what the learners bring to the classroom. This experience sowed the seeds of what later became Dogme The analogy I drew between the “Dogme 1995” film collective, and our own teaching training agenda as it captured a feeling that was simmering at the time.

Emma: So what’s Dogme? Well, a quick look around and we find that “Dogme 95” (pronounced [ˈd̥ɒwmə]) is an avant-garde filmmaking movement started in 1995 by the Danish directors Lars von Trier and Thomas Vinterberg The objective was to create films based on the traditional values of story, acting, and theme, and excluding the use of elaborate special effects or technology in the hope that the industry would give the power back to the artist as opposed to the studio.

Dogme is the Danish word for dogma and in the ELT world it is a critical teaching approach that seeks to:

1.     be transformative, and seek social change

5.     be participatory and collaborative

8.     be non-essentialist, i.e. it doesn’t reduce learners to stereotypes, but rather legitimizes individual identities

English is a single language system that comes from the UK where there are lots of red telephone boxes and a clock called Big Ben. Not.

What is “English” and where is it spoken and by whom? Or should I just do away with the “whom”, because who uses that anymore?

We in the English Language Teaching sector and the students themselves often uphold ideas of what English language speaking culture is and the language itself as a system, when we should perhaps be considering it as a hybrid of systems and considering who the real speakers of English today are.

Scott passionately rejects top-down, one-size-fits-all solutions. He suggests the need for “a more socially responsible, even transformative, pedagogy.” In teacher training and as teachers we need to develop a reflective, self-critical practice to analyze how and what we are teaching, and in what way we embed the “western” view of English or imposing cultural ideas in our materials class content or teaching approach.

Learner Autonomy: Agents of their own education

Carl Theodor Sørensen built the first child’s adventure playground in Denmark in the 1943. It was unregulated, and full of nails and wood and tools –like a junk yard –my idea of heaven as a child. Observers noticed that children who played there without parental or adult interference were happily autonomous. They organized themselves, the tools and materials, learnt, built, developed skills and played.

It didn’t take long for adults to intervene and regulate the situation however. With time and to Sørensen’s deep disappointment, the adventure playground was replaced with neat lines, ordered play equipment and top down authority.

Scott referred earlier to the author Paolo Freire, born in 1921 in Recife, Brazil as influential in his ideas. Growing up, Freire experienced firsthand, the poverty and hunger of the 1929 Great Depression in Brazil. These experiences informed his later work with the poor, in literacy and his own personal educational position.

In 1970 his book Pedagogy of the Oppressed was published in both Spanish and English. It has sold more than a million copies worldwide and is one of the foundational texts in the field of critical pedagogy.

Scott quotes: “Liberating education consists of acts of cognition, not transferrals of information” (1970, p. 60). Freire contrasts two opposing models of education: on the one hand, the “banking” model in which the students are the depositories and the teacher is the depositor. Instead of communicating, the teacher issues communiqués and makes deposits which the students patiently receive, memorize, and repeat (p. 53). As an alternative, Freire advocates a ‘dialogic’ pedagogy, in which the learners become not simply the objects of the teaching process, but agents in their own education. “…The teacher is no longer merely the-one-who-teaches, but one who is himself taught in dialogue with the students, who in turn while being taught also teach (p. 61).”