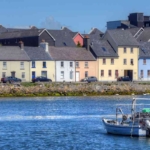 Accommodation in Galway for Trainees

The teacher training centre in Galway can offer accommodation in shared apartments for the trainees during the 4 weeks duration of their CELTA courses in Galway. Applicants can talk about their accommodation needs during their interview with the tutor.

The beautiful university city of Galway is situated on the spectacular Atlantic coast of Ireland.  Galway city, built on the banks of the river Corrib, has 75,000 inhabitants, 20% of whom are students, and this small size means that the city has a friendly atmosphere and is also very safe. Galway is known as Ireland’s cultural heart and is renowned for its vibrant lifestyle and numbers festivals, including the Arts Festival, the Film Festival, Galway Races, and the International Oyster Festival!  The landscape on the Atlantic coast is breathtaking and visitors to this region describe it as The Real Ireland.  Popular day-trips include visits to the world-renowned Cliffs of Moher, the Aran Islands, Connemara and The Burren.

Galway has been named as one of the eight "sexiest cities" in the world. A recent poll ranked Galway as the 2nd best tourist destination in Ireland. It was also ranked ahead of all European capitals except Edinburgh, and many traditional tourist destinations (such as Venice). The New Zealand Herald listed Galway as one of 'five great cities to visit in 2014'. The others were Istanbul, New Orleans, Dubai and Cabo, Mexico.

Galway has a vibrant and varied music scene and it is a major centre for traditional Irish music. As in most Irish cities traditional music is popular and is kept alive in pubs and by street performers. The Galway Arts Festival, one of the biggest in Ireland, takes place in July. It attracts international artists as well as providing a platform for local and national performers. The festival features parades, street performances and plays, musical concerts and comedy acts.

Traditional and contemporary music can be heard at numerous locations around the city. Among the more notable are The Crane Bar on Sea Road, The King's Head on High Street, Tigh Neachtáin and The Quays on Quay Street, Róisín Dubh and Monroe's Tavern on Lower Dominic Street.

Galway City has a reputation among Irish cities for being associated with the Irish language, music, song and dancing traditions. It is sometimes referred to as the 'Bilingual Capital of Ireland', although like elsewhere in the Republic of Ireland, inhabitants converse mostly in English. The city is well known for its "Irishness", mainly because it has on its doorstep the Galway Gaeltacht. Irish theatre, television and radio production and Irish music form a component of Galway city life.

Find out more information about Galway via: www.discoverireland.ie/places-to-go/Galway

"I can honestly say that the CELTA has revolutionized my approach to English in only 4 weeks!"

"The teaching was great and I learned so much."

"I had a great time during this course"