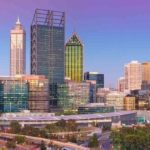 Accommodation for Trainees in Perth

For face-to-face CELTA courses, a homestay or accommodation suitable for trainees can be organized by the center. You can talk about your accommodation needs as part of your interview.

Alternatively,  there are Airbnb options and hotels nearby.

The lifestyle in Perth

A recent international survey confirmed Perth as one of the most affordable and liveable cities in the world. Ranked 8th (from 140 international cities) for quality of life (based on personal safety, access to health and education facilities, political stability, transport and accommodation availability, climate and recreational activities).

Cost of living in Perth

Global comparisons in 144 cities have found Perth to be substantially less expensive than all major American, British and Canadian cities and well below the costs of other Australian cities. Living costs are below the Australian average, including being lower than the living costs in Sydney and Melbourne.

There is an excellent public transport network of bus, train and ferry services. Perth is one of the only Australian cities to give international students a 40% discount on their travel making Perth living even more affordable for students. The city centres of Perth and Fremantle are served by free bus services which run regularly throughout the day.

Cosmopolitan Perth is the capital of Western Australia and together with the historic port of Fremantle is home to almost 2 million people, a significant number of whom are migrants from Europe, the Middle East, North and South Asia and Africa.

Perth has a Mediterranean climate with warm to hot dry summers and mild winters. International students will find the adjustment to the Perth climate very easy.

Perth hosts the interests of some of the most recognisable global companies or their subsidiaries such as IBM, Rio Tinto, Eni Oil & Gas, Siemens, Mitsubishi, Shell, BHP, and more. Perth is a thriving business community and is a global provider of minerals, energy, and food.

Western Australia is the powerhouse of the Australian economy. With 10% of the population it generates nearly 30% of the country's export income. The state also boasts the lowest unemployment rate in Australia and is currently searching worldwide to fill its skills shortages through appropriately qualified and skilled migrants.

Western Australia’s educational institutions and courses are world-class. All institutions licensed to recruit international students are Government registered and accredited. Although the population of the city and state is not large, Perth houses five universities and, in addition to its local Australian students, caters to over 30,000 international students from over 75 countries.

For further information on Perth

For general information on Australia