There are currently no courses available via Derry, UK.
Please see alternative courses here, or contact us 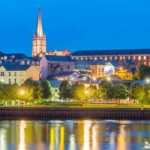 The Derry centre occupies a site of beautifully renovated Georgian buildings which overlook the historic city walls, right in the heart of the Derry, giving students access to all the local amenities. The ground floor houses the reception, admissions, and student support offices.

There are seven large classrooms over the upper 4 floors, as well as a student computer room and relaxation lounge, a self-study suite, resource room and a quiet room for private worship. The school is also home to a large language school, and CELTA trainees will be able to practice teaching students from all over the world during the course.

Accommodation in Derry for Trainees

During the interview stage of the application process, applicants can discuss their accommodation needs during their interview with the CELTA course tutor, who will be able to advise and offer accommodation options. Prices can range from around £120  - £180/week.

Derry (also known as Londonderry) is Northern Ireland’s second city with a population of approximately 150,000 and is the regional capital of the North West of Ireland. It is situated on the banks of the River Foyle, from where the school takes its name.

Derry (which comes from the Gaelic name ‘Doire’ meaning ‘oak grove’) is one of the oldest continually inhabited areas of Ireland. Derry is Ireland’s only completely walled city and one of the finest examples in Europe.

For more information on what to see and do in Derry/Londonderry, visit: www.visitderry.com

"It was a rewarding and challenging course for me"

"Since completing my CELTA course I have taught in Italy, Greece and Derry"