There are currently no courses available via Cork, Ireland.
Please see alternative courses here, or contact us 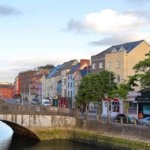 Accommodation in Cork for Trainees

The teacher training centre can help you find suitable accommodation in Cork during your stay. Several accommodation options are available as well as hotels, BnBs, guesthouses, and hostels at varied prices. Further details can be provided upon request at the interview stage of the free application process.

Cork is a university city in southwest Ireland, situated by the River Lee just inland from the Celtic Sea. Home to over 200,000 people, Cork is the second-largest city in the Republic of Ireland and is known for its distinctive accent and role in the Irish Civil War.

Founded in the 6th century as a monastery settlement, Cork quickly grew into an important trade city due to its proximity to Cork Harbour, one of the world’s largest natural harbours. The city exported wool, and imported salt, iron and wine, with the rest of continental Europe during medieval times, but today more commonly trades consumer goods. The city is home to the European headquarters of several large, multinational technology firms, such as Apple, Amazon and IBM.

Cork is distinctly Irish, but also has a good deal of culturally diversity. It’s not uncommon to traverse the main streets and encounter Middle Eastern and Asian cuisine, East European delicacies, Indian buffets and French Patisseries. The city was nominated European Capital of Culture in 2005, and has produced a great deal of well-known Irish poets, writers, singers and actors.

The Church of Saint Anne sits atop a hill in the Shandon district, the views from its bell tower looking out over rows of colourful buildings, green fields and the Atlantic Ocean in the distance.

Find out more about Cork via the official tourist information website.

"I recommend this course a million times"