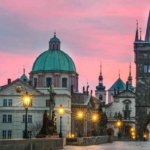 The training centre in Prague is one of the primary locations for teacher training and teacher development in the country. The main school in Prague is surrounded on all sides by a garden with trees and benches. It is a five-minute walk from the metro station Budějovická, which is just 10 minutes metro ride from the city centre.

The training centre has recently been completely remodelled and features up to date facilities, complete with classrooms, staff-room, administration and a well-stocked library. There is also a café and full service located on-site. How to get to the training centre in Prague: Take the Metro (red line) to station Budějovická.  From there, it is a pleasant five-minute walk to the school.

Accommodation for Trainees in Prague

Trainees can organise accommodation via the Prague location, with accommodation costing around 400 EUR for a CELTA course. Alternatively, you can organise your own housing, using websites such as www.airbnb.com and www.booking.com.

Prague, the capital of the Czech Republic, is situated on the River Vltava in central Bohemia, and in the very heart of Europe. It is a city of great historical and cultural interest, and in recent years has become a major tourist attraction - rather too 'major', in the view of some of the residents! The centre of Prague is dominated by the Prague Castle and the magnificent St Vitus' Cathedra (see picture above). Other historical attractions include the Old Town Square, one of the finest squares in Europe, and the old Jewish quarter.

Some of the suburbs of Prague tell a different story: many consist of large expanses of grim apartment blocks. A redeeming feature of such areas is they have a fairly low crime rate in comparison to similar areas in Western Europe. There are, in addition, a number of attractive suburbs and some very upmarket ones. Despite the unappealing nature of many of its suburbs, there are few areas of Prague from which parkland and forests are not within reasonable walking distance.

There are a number of places of interest within fairly easy reach of Prague, including the fascinating medieval towns of Kutna Hora and Tabor, and King Charles IV's splendid castle at Karlstejn. While the surrounding countryside is not as dramatic as that in the north and east of the country, the Prague region still possesses a number of areas of natural beauty.

Prague has a variety of cultural attractions:

Find out more about Prague.

"I’d recommend it to anyone!"

"The CELTA course proved to be quite a roller coaster!"

"I am really pleased that I chose CELTA."