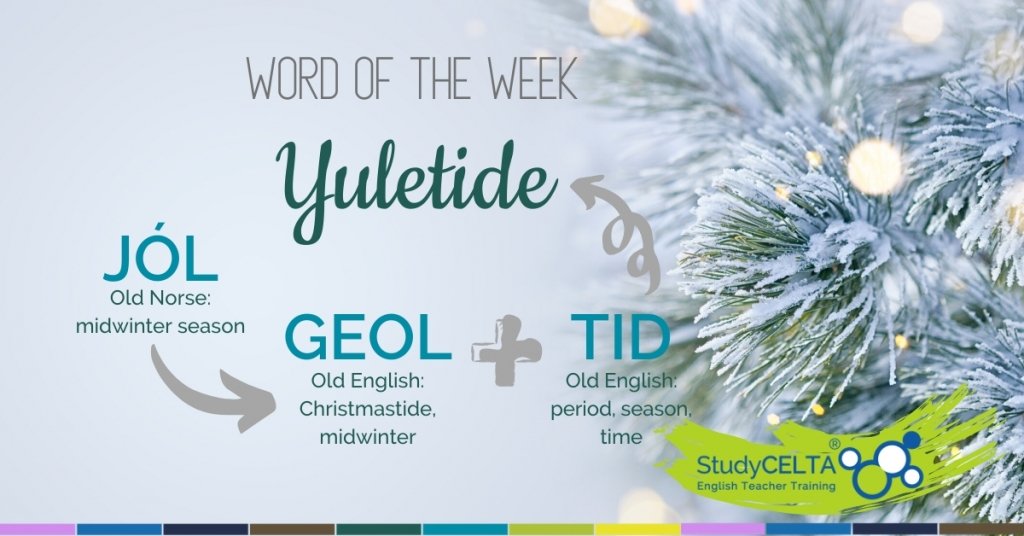 Around Christmas and New Year, English speakers use some unique, old-fashioned words. The etymology of these words can often be traced back to pre-Christian Pagan celebrations. These celebrations eventually merged with Christmas. They inform the traditions and language surrounding the holiday to this day. One of these words is “yuletide,” which is synonymous with Christmastide, and means the period between Christmas Eve and Epiphany. However, the strange-sounding word might be confusing for English learners. It is helpful to know where it comes from in order to teach it.

Before Christianity spread throughout Europe, Germanic peoples celebrated the 12-day festival of “Yule." This festival took place in midwinter, or late December, with the Norse word jól meaning “midwinter season.” This word became “geol” or “geola” in Old English, which also meant “midwinter.” This eventually became “yule.” With the introduction of Christianity, the Pagan tradition was merged with the celebration of the birth of Christ to become the tradition we recognise as Christmas. “Yule,” then, became synonymous with Christmas.

On the other hand, “tid” meant time in Old English, and referred to a season or period.  This became “tide,” which refers to the period around a holiday. Merriam-Webster writes that “tide” can be defined as “an ecclesiastical anniversary or festival; also : its season.”

Your learners will find the word “yuletide,” and associated words, mostly in Christmas carols. Some of these accompanying words include tidings (happenings) and, less obviously, jolly. The latter may come from Old French “jolif,” which in turn comes from jól.

The former can be found is carols such as We Wish You a Merry Christmas. This song sings of "good tidings we bring," implying that they wishing that you have good happenings, according to Merriam-Webster. Again, it's an old-fashioned way to speak that typically only comes out during the Christmas period.

Scandinavian countries still use the word “jul” for Christmas, and other Northern European countries use terms closely related to jól for the Christmas period.

Understanding where certain unusual terms come from can help you in the classroom. It can help you explain a term or answer a question about why we use that word. It is also helpful to relate it to other languages, especially if you have learners from a country that uses a related term.

Wishing you good tidings this Yuletide! That is to say, wishing you the best this midwinter season!

email
TAGCELTA ELT history Word of the Week
Previous PostCELTA Courses Bergamo, Italy Next PostTeacher Training Barletta
CELTA: Am I Eligible?
Delta: Am I Eligible?
Get news and updates