Everything you need to know ab...
Home Blog The ELT Industry Six Famous People Who Once Taught English 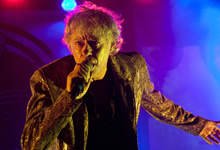 If you’re thinking of teaching English, you’re probably wondering what’s ahead: the countries you’ll visit, the things you’ll learn, and the students you’ll inspire. But, the role of a humble English teacher could also be the starting block for a career of fame and fortune – more than likely as a writer or a rock star. Want to know how? Well just look at the big names who have come before you, here are our famous people who once taught English...

Famous People Who Once Taught English:

The worldwide best-selling author spent a stint teaching English in Porto, Portugal before she wrote the first of her famous Harry Potter books. She taught night-time classes and wrote during the day, while listening to Tchaikovsky’s Violin Concerto. A marriage, a new-born daughter, a divorce and a few years later, Harry Potter and the Philosopher’s Stone was born. Today, first edition copies of that first book are worth up to 25,000 pounds!

There seems to be a trend of best-selling authors starting out as English teachers. Dan Brown, the writer of novel-cum-Tom Hanks film The Da Vinci Code, taught English and Spanish in New Hampshire, USA. But, he wasn’t pursuing writing at the time – in fact, he was actually trying to get a big break in the world of adult contemporary pop music. Seriously. It wasn’t until a trip to Tahiti that he gave up on his English-teaching career and pop-singing dreams, and started writing his first book.

Rumour has it that music mogul and philanthropist Bob Geldof spent some time teaching English in Murcia, Spain. The standards for qualifications were a little different in those days, recalls Geldof: “The sole qualification for being able to teach [English] in the school was that you knew no Spanish”. Looking for a change of scenery, he soon took off to Canada and began editing an underground newspaper, before returning to his home country of Ireland and starting the now-famous band, The Boomtown Rats.

Another author and another Irishman, James Joyce, famed author of Ulysses, took up English teaching during the First World War. He and his wife went into voluntary exile in Switzerland, and was duped into a non-existent teaching role at the famous Berlitz Academy. He ended up in Pola, at the time part of the Austro-Hungarian Empire, but now in modern day Croatia, where he taught English to naval officers. That is, until, an espionage ring was discovered in the city, and all foreigners were kicked out. Many of the people he met during that time eventually inspired characters in Ulysses.

Photo Credit: A Daybook* for

Before forming band The Police, Sting worked for a couple of years teaching English in the UK. In a case of art imitating life, the band’s famous song ‘Don’t Stand So Close To Me’ was inspired by his short-lived teaching stint. “I’d been through the business of having 15-year-old girls fancying me,” he recounts, “and me really fancying them!” Sure, he was in his early twenties and taught during the liberal early 1970s, but still – that’s a little creepy, Sting.

In the mid-1800s, Charlotte and her fellow author sister Emily travelled to Brussels, Belgium to attend boarding school. In return for their tuition, Emily taught music and Charlotte taught English. They both returned to England shortly afterwards, due to the death of their mother. But, just a year later, Charlotte went back to Brussels to continue teaching. Her second stint was not a happy one: she was homesick and had a strange attachment to the school’s married owner, Constantin Heger. Eventually, she moved back to England, where she wrote The Professor – some of its events inspired by her time teaching.