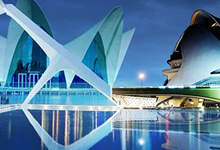 If you draw a right angle between Madrid and Barcelona, straight out west to its Mediterranean coast, on its apex you land in what is arguably Spain’s most overlooked city. Here, wedged between tourist beach towns and a shipping port sits Valencia.

Sure, it’s well-known, high up on the list of most people’s Spanish geography knowledge, but infrequently visited; its population fluctuates during festival season, yet visitor levels fall in the interims. Most tourists skip it for the southern Costa del Sol, Gaudi-infused Barcelona, or the romantic Seville.

That’s exactly why, as a TEFL teacher, it’s the best place to live and work.

Just like the rest of Southern Europe, the demand for CELTA (or equivalent!) qualified teachers is booming, yet the current numbers are low. That makes Valencia one of Spain’s last untapped TEFL markets; a city not only known for its flavoursome seafood dishes and wild festivals, but also for technology, science and innovation.

It’s the kind of place where being hit in the face by a flying tomato is just as much as an authentic cultural experience as visiting the planetarium. Where dodging five-story tall, burning objects is among the city’s favourite past times. Where the main language spoken is unique to its region.

The last Wednesday in August marks the famous Tomatina festival, where thousands of stain-loving pilgrims in disposable, white clothes, descend on the nearby town of Buñol to hurl tomatoes at each other.

Like the running of the bulls in northern Spain, and the zealous Holy Week processions in its south, La Tomatina is one of the country’s ultimate ‘bucket list’ experiences.

Legend has it that the messy tradition began with an infuriated parade participant, who began a massive food fight when he was knocked off a float.

Now, 145, 000 kilograms of out-of-date tomatoes are shipped into Buñol – population 9,000 – in preparation for the day-long event. The population briefly rises to 40,000, the majority of visitors Australian, British and Japanese.

Back in the city centre, however, there’s an equally as crazy event, that’s not nearly as well-known as its squashed vegetable-throwing neighbour.

Las Falles – a weeklong event in which the Valencians parade handmade, paper-mâché statues filled with fireworks through the streets – overtakes the city in March. The constructions, called ninots, are satirically inspired – last year’sFalles included a depiction of Barack Obama and Vladimir Putin dancing The Nutcracker.

The City of Arts and Sciences

With a population of just over a million, Valencia is Spain’s third-largest city. To its south sits the world-renowned City of Arts and Sciences, a cultural and architectural complex that features a planetarium, botanic garden, theatres, aquarium and sports centre.

Two sides of the coin. On one, the crazy, vibrant, borderline barbaric festivals. The other; technology, advancement, innovation, high-quality language schools and a booming port industry.

Everything in Valencia comes in pairs, the city is even bilingual.

Both Castilian Spanish and Valencian are recognised here, yet, like the rest of Spain, there’s an increasing pressure to acquire English proficiency.

The best way to make a start teaching English in Valencia is to, firstly, get qualified there. Standards for English teachers are rising and, more and more, students are expecting their teachers to come certified.

Our school is the only one in the entire province accredited to run the CELTA, and is also one of the most prestigious in the country. And, with its high standing come high connections; meaning fresh graduates are often snapped up by local academies.

The Spanish have a word for it: enchufes. Literally translated, it means ‘plugs’, and the Valencia centre has a lot of them. Towards the end of the course, students are included in a free (yes, completely!) job placement service, aligned with 35 different schools throughout the city.