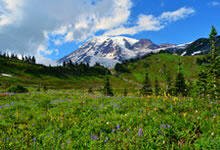 From Tacoma to Vancouver: Discovering the Pacific Northwest

From bustling cities to slow-paced towns, cool waters filled with seals and orcas, to high-altitude glaciers above remote terrain; the Pacific Northwest is a land of stark contrasts.

The bays and sounds of the area, stretching from Oregon in the south to British Columbia in the north, are littered by islands; some so rugged they are largely considered frontier, despite the populous civilisations in nearby Seattle, Tacoma and Vancouver. Others, however, are home to up to 60,000, where the inhabitants commute by ferry every day to work.

People from the PNW live by nature – it’s inescapable – much like the rain that so often blankets the major cities.

It’s known as a high rainfall area, damp and cool, but that’s all part of the charm – the blue-grey of the waterways, contrasted with the deep green of the firs and cedars, and the black and white shadow of Mt Rainier in the distance.

On weekends, Pacific North-westerners can be find hiking, fishing, or kayaking between islands, sipping a fresh-roasted coffee or a craft beer. The hippie revolution of the late sixties has some of its roots tied to this area, and with a strong, liberal and environmentalist culture, an ‘alternative’ feeling is still present today.

Starting in Tacoma, USA, nestled between the Mt Rainier National Park to the east and Puget Sound to the west, you really start to get a sense of what makes the Pacific Northwest tick.

Walking down the main streets of the city, you half expect a bearded man, lumberjack style-jacket and saucepan-sized cracked hands to come hurtling down the road on a tractor.

Like much of Washington state, Tacoma was built on logging, and lumber mills once took up the shores of the sound. It still has the pure, old-fashioned Americana vibe, more village than suburbia; neat rows of slope-roofed houses, pickups parked in the drive, side-street shops with chipped, wooden exteriors shouting ‘Bail Bonds!’.

But you might still come across your lumberjack; instead of a tractor he’ll be riding a fixed-wheel bike, his beard barbershop-trimmed, on his way to get groceries at the weekly farmer’s markets.

The city centre has been revitalised since it’s darkest days post-Great Depression, when an ad-hoc shantytown known as Hooverville was nicknamed ‘Hollywood’ for the movie-style crimes being carried out there. Today, there’s a glass-blowing museum on the foreshore, attracting regular artistic residencies, and local government initiatives seek to cover vacant cityscapes with murals and other pop-up art installations. Gentrification is quickly evolving the once backwater city to something almost cool.

About an hour’s drive out of the city lies the vast Mt Rainier national park, home to the huge, active stratovolcano of the same name. Spanning almost a thousand square kilometres, it’s full of scenery pulled straight from an impressionist landscape painting, slopes of sky-scraping cedars like tiny, individual brushstrokes on a canvas.

It’s here you’ll find the aptly-named Paradise and its never-ending meadows of wild flowers, stretching to the base of the snow-capped mountain. The hundred-year-old Paradise Inn, a rustic lodge fitted out with stone fireplaces and hand-carved ceiling beams, is like a trip back in time – somewhere between the early 1900s heyday of exuberant country inns and the set of The Sound of Music.

From Tacoma station you can take the Amtrak Cascades straight up to Vancouver, Canada, a scenic, five-hour train journey that often skirts the edge of the Puget Sound. If you’re lucky, you’ll spot a pod of orcas or the odd seal – bald eagles and great blue herons are also known to reside around the untouched, windy outcrops on the way.

Vancouver, much like its smaller, Pacific North-western cousin Tacoma, was initially founded on the lumbering trade, and evidence of the early sawmills still litters the city. Gastown, northeast of the city’s centre, was named for a talkative saloon proprietor named Gassy Jack. Legend has it that the local mill workers built his saloon, in exchange for all the whisky they could drink in one sitting.

Today, Gastown is home to a mix of contemporary fashion boutiques, art spaces and music studios. New, upscale housing lines the cobblestone streets, where many an anti-gentrification protest has been held.

Vancouver is one of the most multicultural cities in the country, if not the world, with a mixture of indigenous residents, the earlier, European settlers, and a huge Chinese diaspora. 50 per cent of the urban population do not count English as their maternal language.

International eateries permeate the city, from trendy restaurants to greasy takeaways, and everything in between. The Granville Entertainment District, a seven-block stretch of nightclubs and bars, is often packed – even when the temperature doesn’t break freezing.

In keeping with the Pacific Northwest’s environmentalist sentiment, Vancouver was the founding location of Greenpeace in the late 60s. Today, over 93 per cent of the city’s power comes from renewable sources.

In less than an hour’s drive from the city, the overwhelmingly looming mountains, with their sheer rock faces, impossibly green firs and reddening maples, begin to dominate the scenery. In Squamish, homeland of the indigenous people of the same name, there’s hiking, kayaking, rock-climbing, mountain biking and a gondola that stretches from the Howe Sound to a summit some 850-metres above sea level.

Modern, cosmopolitan cities – untouched, rugged forests and mountains; there’s no shortage of great contrast at every turn in the Pacific Northwest.

email
TAGCanada Pacific Northwest Teaching Abroad Vancouver
Previous PostTen definitive answers to your most common CELTA questions Next PostSouth Korea: Ample jobs, high salaries, but from 2016 you will need a CELTA
Back to Blog