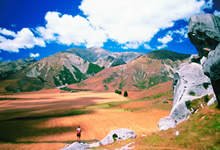 Looking out over the ocean from New Zealand’s east coast you get the sensation that you’re perched on a wild frontier. Between here and South America lies nothing but water and a few, scattered Pacific islands. From the bustling European, Asian and American metropolises in the Northern Hemisphere, this is about as far as you can get.

The first thing visitors to Aotearoa – the indigenous Māori name for the island country – notice, is the overwhelming blue. The pearly-turquoise waters extend from the coastline, and inwards, to winding rivers, vast lakes and frozen glaciers. New Zealand is a tapestry made from every shade of blue, at times churned into white foam, and contrasted with a cool green.

It’s the green, however, that many visitors come to expect. The long-grassed hills, an impossibly bright, healthy shade, made famous by the Lord of the Rings film trilogy and, more recently, The Hobbit. Small, pointy-eared people wouldn’t seem so out of place here – the New Zealand countryside looks and feels like a fairy-tale, the far off Wonderland at the bottom of Alice’s rabbit hole.

Then there’s the black – a colour come to represent so many facets of the New Zealand psyche both inside, and abroad. It’s the colour of the world famous, champion rugby team; the background that contrasts its famous silver fern symbol. It’s the colour of dormant, volcanic mountains in the distance, and beaches covered in black, soft sand. It’s the tattoos drawn on a Māori warrior’s face.

To many, New Zealand seems like a far-off, southern island frontier – hardly the place to go for professional and career development. But, mixed in with the country’s famous natural landscape, sit a number of cosmopolitan cities, reminiscent of their European cousins so far away.

Auckland, the country’s most populous urban centre, is an exotic melting pot – the city boasts the largest Polynesian community in the world.

Then there’s Christchurch, a city battered by earthquakes, now a global showcase of resilience and innovative, disaster-proof architecture.

And, of course, Queenstown; the country’s extreme sport centre – skiing, bungee jumping and great burgers, packed into a quaint town framed by snow-capped mountains and a deep blue lake.

The country may have three official languages – English, Māori and Sign language – but international students are flocking to the land of the long white cloud to learn a particular one.

The English language sector generated $343 million NZ in 2012, the majority of enrolments from China. A full-time English teacher can make, on average, $50,000 NZ per year, and a standard restaurant meal in Auckland’s business district costs about $16.

So, that’s why New Zealand is also an ideal destination for those hoping to carve their slice out of the booming English language industry.

Why you should study CELTA in New Zealand

When most people think of starting their high-flying, big-travelling, overseas careers, they often imagine large, overflowing European or American metropolises. Study the course in a modern city, it’s assumed, and share your knowledge around the world.

That’s the beauty of New Zealand, you see; in one sense you feel as if you’re balanced on an other-worldly precipice in the endless Pacific Ocean, yet, in another, you’re in a technologically advanced, Western nation – with some of the world’s most modern facilities and forward-thinking innovations.

The teacher training centres in Wellington and Auckland, both offering the Cambridge CELTA course, rival their counterparts overseas, in quality, content and professional development.

“The teacher training Centre in Auckland comes with highly qualified and experienced trainers, and excellent facilities and resources”, says Sara Imani, an Iranian national who completed a CELTA qualification in 2013, “We had computers, printers, DVD players and, more importantly, a well-stocked resource library.”

Imani says that the course also provided her with useful career advice.

“In fact, I was offered part-time work right after the completion of the course.”

Sam Denman, from the UK, picked the real-life teaching hours, included in the course, as a particular highlight.

“They represented a microcosm of the world: in age, background and country, with English as their common medium”, he said.

It may look like a small ink blot on the blank space that occupies most of the southern side of the world, but, in reality, New Zealand is on the verge of professional and career development opportunities.