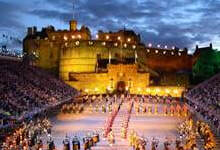 Kilts and Comedy: Take your CELTA during Edinburgh Festival Season

Edinburgh is far and wide the UK’s top festival city. Throughout the month of August the population almost doubles – from 700,000 to over 1.5 million over a few short weeks. There’s something for all tastes; from the grandly traditional Military Tattoo, to the alternate crowd at the Festival Fringe.

If you’re looking to get qualified as an English teacher, and experience a buzzing city atmosphere at the same time, look no further than Edinburgh. StudyCELTA is currently offering courses smack bang in the middle of festival period. The Scottish capital is the place to be this August, and the CELTA will take you there.

The International Fest is the city’s oldest; a top class amalgamation of music (mostly classical), theatre, opera and dance. Performers are by invitation by the director only, meaning the shows are the crème de la crème of their fields.

The performances take place in some of the city’s grandest buildings, from the red velvet-interior King’s theatre, to the white stone pillared Lyceum. As part of the huge, opening event, light and animations will be projected onto the façade of the Usher Hall; a digital dance in time to escalating classical music.

Quite possibly the best-known of the historic city’s many events, the Festival Fringe brings together art, music, dance, theatre, storytelling and comedy on hundreds of stages across Edinburgh, over a three week period. It’s the world’s biggest arts festival, and arguably the best – this year’s event features 2,695 shows in theatres, pubs, gardens and even the street.

It started in 1947 – the same year as the International Festival – when eight uninvited theatre troupes turned up to the aforementioned and performed on the street. Since then, the Fringe has overtaken its old rival in terms of popularity, and still continues to ‘defy the norm’.

Above all, the Edinburgh Fringe is known for its comedy; dozens of big-name comics were known to have caught their ‘break’ here. This year’s event features stand up from world famous comedians, such as Adam Hills, Jimeoin, and, bizarrely enough, English cricketer Freddy Flintoff.

This is the big one; the ultimate celebration of Scottish song, dance and history all rolled into hundreds of kilted dudes playing bagpipes. The Military Tattoo is sometimes called “the greatest show on Earth”, and is watched annually by over 100 million people on television. Another 300,000 attend the city to see it live.

But it’s not just Scottish tradition; the spectacular also includes aspects of Britains colonial past. Most notably, last year’s tattoo featured war dances from Maori Haka groups, reminiscent of those seen by exploring Scots when they landed in New Zealand, hundreds of years ago. It also included military bands from Trinidad and Tobago, South Africa and Singapore.

This year’s event will include performers from for different continents, including the very mysterious sounding Switzerland Top Secret Drumming Corps.

The Art Festival is the UK’s largest annual visual arts celebrations. Last year the event attracted over 300,000 visitors, all there to see the (largely free) exhibitions from both Scottish and international artists.

This year’s festival has a particular focus on contemporary art, but still includes some of the most important historic works. Notably, the Artist Rooms at the Scottish National Gallery of Modern Art is hosting a three-room collection of pieces by Roy Lichtenstein.

Here’s one for the book worms; Edinburgh is, after all, where J.K Rowling wrote her first Harry Potter book, in the now-famous Elephant Café. The International Book Festival will put on over 750 events over two weeks, from author meet and greets, discussions and workshops.

The mostly free festival is held in the leafy Charlotte Square Gardens, annually filled with lounge chairs, picnic blankets, and readers taking in the August sun. It’s the perfect spot to relax post-CELTA course, or even catch up on some study!

Our training centre in the Scottish capital can boast over 50 years of experience. It’s located right in the heart of historic New Town, and just a stone’s throw from major festival events and public transport.

Dreaming of bagpipes and full Scottish breakfasts? Get in touch and we’ll get you to the festival city.

TAGEdinburgh Edinburgh Festival Teaching Abroad united kingdom
Previous PostIs Australia the next best place to teach English? Next Post6 Reasons to take your CELTA or Delta in Bournemouth!
Back to Blog