Everything you need to know ab...
Home Blog Teaching Abroad Chill out and take your CELTA in 5 weeks instead of 4 in the stunning region of Brittany, France 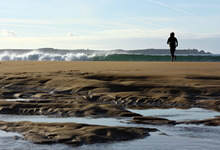 Chill out and take your CELTA in 5 weeks instead of 4 in the stunning region of Brittany, France

France, more specifically Brittany, has been chosen as the ideal location for a new-style teacher training programme that takes CELTA in 5 weeks instead of the usual 4 allowing you plenty of time to enjoy all that this stunning region has to offer.

Anywhere you wander in Brittany, whether it be along jagged coastal cliffs, through cobblestoned seaport streets, or along beautiful deserted beaches, you’ll be constantly reminded that this is not France as you know it. The local music, made up of bagpipes, drums, and the thin, haunting filigree of a tin whistle, which play folkloric tunes tell you that you are in the land of the Bretons, where Celtic bloodlines run as deep as a druid’s roots into the rocky, sea-swept soil.

The Bretons, Frances most fiercely regional and independent people delight in celebrating their ancient culture—circle dancing at street fairs, the women donning starched lace-bonnetcoiffes, and the men in striped fishermen’s shirts at the least sign of a regional celebration.

The region has always been popular for summer holidays with those from other Celtic areas nearby but these days Brittany is also attracting a different kind of Celt – trainee English teachers.  Nearly two billion people are predicted by the British Council to be actively learning English by 2020, nearly one quarter of the world’s population – and this means the demand for English teachers has never been higher.

The freshest seafood on earth…

Brittany is located at the extreme North-Western corner or France and with over 2000km of coastline it’s no surprise that its food and gastronomy are based on the mouth-watering quality of its fresh seafood.

The most renowned specialities of the region include fresh lobster which can be bought whole for around €13 and the ubiquitous tasty and filling Crepes and Galettes which can be found in just about every restaurant and pub in the region.

The regions tipple of choice may also seem rather familiar to those from north of “la Manche”. Cider making goes back here for centuries and is the drink of choice in many of the country pubs which dot the landscape, making Brittany feel not a million miles away from Somerset or Cornwall.

A walk through the ages…

For amateur historians Brest is a jewel, as time has left its mark on every corner of the city. From the constructions of Vauban right up the destruction wrought in the Second World War, every building in this city is a witness to the ravages of the passage of time.

The castle of Brest was built in the third century AD and nowadays houses the national museum of the French navy and the maritime history of the city.

1631 was the year in which the all-powerful Cardinal Richelieu had the military and naval installation known as the ‘Arsenal of Brest’ built. In this painting by Nicolas van Blarenberghe we can see ships being loaded in the Arsenal of Brest to go and fight in the American civil war on the side of the Republicans.

During the Second World War, Brest was the scene of a veritable siege as the allies advanced inland from their positions on the Normandy beaches. Today you can still visit a famous bomb shelter in Brest known as the “Abri Sadi-Carnot” where hundreds of people tragically perished in an accidental explosion.

Today Brest is the second most important naval port in France. Renamed ‘Brest metropole Oceane’ it continues to develop an economy inextricably linked to the sea and its maritime history.

Our courses in Brittany…