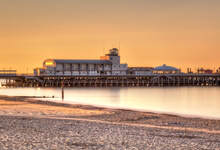 Why Bournemouth Comes Alive in Autumn

Outside of the summer months is the best time to live and study in Bournemouth. Here’s why.

It’s chilly on the pier. The October wind whips white foam off the waves and leaves a salty tang, hovering in the air, above the 180-metre-long, wrought-iron landing. Despite the autumn chill, however, there’s still a handful of surfers trying to catch a break in the artificial reef below, protected against the cold by black steamer wetsuits. A few tourists, stragglers from the summer season that’s just drawn to a close, pace the creaking decks; their cheeks stained pink by the wind.

Boscombe Pier is the little brother to neighbouring Bournemouth Pier, the two structures long-standing testaments to the oh-so-British love of attraction jetties from yesteryear. The former is lesser-visited, lined by an almost art-deco style, winged shade shelter all the way down. The latter; more popular, stacked with sunhats and ice cream in summer, a buzzing bar and restaurant above.

Bournemouth is the quintessential British seaside town – the striped deckchairs, the cawing seagulls, the fish and chips by the beach. Six million people visit the seaside spot every year, mostly day visitors from inland towns and cities during summer.

You’d expect that outside of the warmer months, Bournemouth would turn into a ghost town.

But the October and November shoulder season is when the town’s arts and culture scene comes alive; the Arts by the Sea Festival illuminates the foreshore throughout October, the weekends are marked by outdoor markets selling vintage clothes and artisanal products, and live music is played in the town’s numerous bars, restaurants and nightclubs.

Then there’s the colour; Bournemouth’s Central Gardens turn a striking shade of orange, yellow and red, as the oak trees begin to shed their leaves for the cold season ahead. A walk through the woodlands leads you to the 150-year-old, Victorian gothic-style water tower, a roosting spot for moth-hunting bats. Beyond that, a coy pond, where wagtails and spotted lizards bask in the mild autumn sun.

Bournemouth, population a little short of 200,000, is where old-fashioned England and Brit-cool collide. There’s the history; echoes of the English arcade heyday at the pier and beach pavilion, and the war memorial commemorating the town’s 219 civilian deaths.

The nature; nearby is the country’s second world heritage site, The Jurassic Coast, known for its varied geology, sheer limestone cliffs and sea-battered natural landforms. And to the north-east sits the huge New Forest National Park, an ancient royal hunting ground filled with deer and wild boar.

Then in town, there’s the culture; the university ensures a constant influx of students, vibrant nightlife and a growing foodie scene. The newly-promoted AFC Bournemouth also attracts some of the UK’s biggest Premier League football teams, and of course, their rowdy followings.

“It was one of the most challenging tasks I have ever set myself”, says Gill Hinds, who took the CELTA in Bournemouth, “But I was so impressed by all the guidance we were given, the superb organisation, the range of areas covered in the daily sessions and the invaluable teaching practice and feedback.”

Founded in 1984 with a grand total of just three students, the family-run school is just 10 minutes by bike to the town centre, and 20 from the beach. With free internet, a study centre and study rooms, a kitchen equipped with a fridge and microwaves, and a library, it’s little wonder the school has a 98 per cent CELTA pass rate.

“I can say with certainty that the training gives you exactly what is required,” says another Bournemouth graduate, Michael Cannon, “I have now reached the dizzy heights of Director of Studies [at a school in China]”.

The school is running two CELTA courses in both October and November, both with a huge £150 discount.

And, for more experienced teachers looking to take a further step in the industry, the Bournemouth centre also runs a number of course options for Delta modules, with an impressive 83 per cent pass rate across all Delta modules.

With ferries leaving to Spain and France at nearby Poole, and an international airport just outside of the city, it’s the perfect first stepping stone to a career in teaching English.

To apply, contact one of our CELTA or Delta experts to request more information or an application pack.

Bournemouth: What we offer

TAGBournemouth Teaching Abroad
Previous PostPart 1: An Overview of How To Open Your Own English Language School Next PostWhat Does the Future Hold for Online CELTA?
Back to Blog