Everything you need to know ab...
Home Blog Teaching Abroad Is Australia the next best place to teach English? 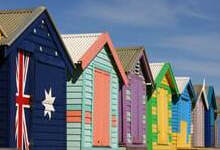 Is Australia the next best place to teach English?

You’d be forgiven for thinking that the booming English teaching destinations are being forged in Asia and the Middle East, from Singapore and Taiwan, to Dubai and Saudi Arabia. Formerly developing countries now with burgeoning middle classes, and a growing demand for fluency in the lingua franca.

So it may come as a surprise to learn that Australia – a far-away country with English as its dominant language – is rising in the stakes as a teaching travel destination.

Australia is spoilt for choice by its natural environment

A land of opportunity

Think endless, red sand plains, lush rainforest and landscaped plucked straight from an impressionist painting. On a train to a major city centre, different faces, different accents, languages and dialects all being spoken at once.

Both environmentally and culturally, Australia is one of the most varied countries on earth.

Their experiences are broadly positive; 90% of students surveyed last year said they were satisfied with their learning experience, and word-of-mouth recommendations mean more and more learners are heading Down Under.

High up on the pay scale

That’s where CELTA-qualified teachers come in – the demand is growing, and so too the recognition of the Cambridge course.

Australia is internationally renowned as having the highest minimum wage in the world, and on average, a CELTA certified teacher can make up to AUD$50 per hour at an inner-city academy.

Plus, it’s home to reputable and internationally-known language teaching centres, all showing great percentage rises in student numbers throughout 2015.

This is partly due to the nation’s accessible student visa options – one of the few in the world that permits a student to also work certain fortnightly hours.

On top of that, getting a job (whether temporary or permanent) is bureaucratically simpler for a language teacher with the introduction of the working holiday visa.

And, once there, immigration law permits employers to sponsor longer term visas for highly-skilled employees (re: CELTA trained) to stay on for several years.

The view from our teaching training centre on the Sunshine Coast

Study your CELTA in Oz

Getting ahead of the game starts with getting the right qualifications – and the CELTA is the way to go. It’s already caught on as the most recognised and sought-after certificate for budding teachers in Australia.

And, it’s not just limited to native speakers – those with English as their second language, and a fairly good proficiency, can study too.

“Doing the CELTA is one of the best decisions I’ve ever made”, says Audrey Singh, a Fijian national who took her course in Melbourne, “I’ve learnt to teach English which is my greatest achievement

“I’ve also learnt to believe in myself which is a lesson for life”.

StudyCELTA currently offer courses in six different locations across the country. From the pure beaches of the Sunshine Coast, to the buzzing metropolises of Sydney and Melbourne, there are still up to 10 starting dates available throughout the second half of the year.