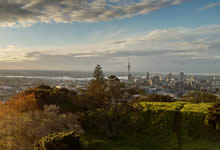 Fresh out of your TEFL course, the English teaching world is your oyster. We look at some of the best locations to start your career as a new English teacher.

When most new English teachers begin their TEFL careers, they have a pretty good idea of where they want to be: but a cloudier one of what it’ll take to get there. Working your way up the academy ladder, to a more sought-after destination or to a school with a higher wage takes hard work and patience – and the right starting point.

Whether it’s your dream to teach in Asia, direct a school in Europe or just get the edge at the start of hiring season, we’ve picked out some of the best TEFL locations for new English teachers.

Auckland is a hidden gem: an often overlooked destination by many first time English teachers, perfectly positioned for a teaching career in Asia or the Pacific. The coastal city is New Zealand’s biggest, and one of the world’s most diverse; 40 per cent of the population were born overseas.

An arguably secondary city, Valencia is often hidden in the shadows of its bigger or more famous Spanish counterparts, such as Seville, Madrid and Barcelona. But, there’s a lot to love in the coastal, Catalan-speaking city with a population of 800,000.

This South-East Asian city is the perfect starting point for newly qualified English teachers for its range of jobs, low cost of living, and large expat population. With a population of eight million (and even more motorbikes!), the buzzing, crowded city isn’t for the faint of heart, however if you’re the kind of person who likes to jump in the deep end without first dipping in a little toe, Saigon is your ultimate diving board.

Now this was unexpected – but hear me out; there are so many reasons why England’s southern cities are the perfect place to begin your TEFL career. Looking past just London, there are a wealth of opportunities along the coast; in Canterbury, Bournemouth, Portsmouth and Torbay, and even as far up as Bristol in the south west. But why? Summer, that’s why. Foreign students flock to these cities over the warmer months for intensive classes and holiday camps, meaning that from June to August there’s a huge and sudden demand.

The jewel of Eastern Europe is quickly becoming a hotspot for expats, with a trendy nightlife, diverse restaurant scene and obscenely low cost of living. While it’s hard to find contracted teaching work (most schools require teachers to work ‘freelance’), there’s no shortage of private classes to make up a good wage.

TAGAuckland New Zealand Teaching Abroad
Previous PostWhy you need to move to Sliema, Malta (before everybody else does) Next Post4 Reasons Why Auckland is the Cultural Gateway to Asia and the Pacific
Back to Blog