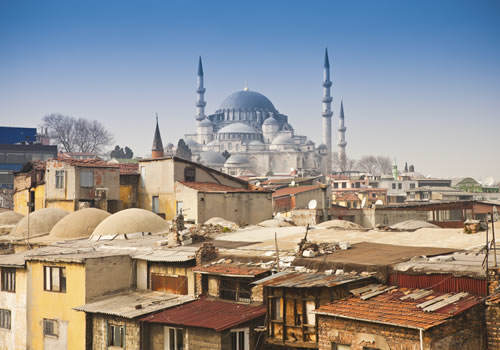 The Roman Empire, Byzantine Empire, Latin and Ottoman Empires: Four empires in which Istanbul has played a major role pulling together East and West, Europe and Asia into a rich cocktail of culinary, written and visual culture. Istanbul is unmissable and definitely on our bucket list of places to visit.

1. Istanbul – where Asia meets with Europe

Istanbul is one of the world´s most open-hearted and unique cities, situated between two continents – it´s where east meets west, or vice versa. This unique location, combined with its history and occupants of different cultural backgrounds, make this city a true melting pot.

2. Istanbul- The City of Four Empires

Istanbul has been the capital city of four empires; the Roman Empire, the Byzantine Empire, the Latin Empire and the Ottoman Empire. This means that Istanbul has got a rich history and so many remains of each of these empires that you can see. The most famous landmarks of Istanbul are the Hagia Sophia, the House of the Ottoman Sultans, Topkapı Palace with its blue ceramics, Sultanahmet Mosque and the biggest covered bazaar – the Grand Bazaar.

3. Istanbul – the City with Breathtaking Views

Whether it´s the spectacular view of Bosphorus from a boat, or a taste of nature on the Prince Islands, Istanbul has it all and undoubtedly has some sights to out on your bucket list.

4. Istanbul – the City of Serious Shopping

In Istanbul there are lots of malls, where you can find everything you are looking for. However not only are there these malls to enjoy, but when you come to Istanbul you might also choose to visit both of the district bazaars, the famous shopping streets and the touristic Grand Bazaar and Spice Bazaar.

5. Istanbul – the Perfect Mix of Eastern and Western Food

Istanbul is clearly a much-loved and highly documented culinary wonderland. The mix between the eastern and western cultures stands out the most in the Turkish cuisine. European and Asian flavours and spices collide to create a uniquely Turkish experience.

6. Istanbul and its Popular Cafes

Streets across the city are filled with popular cafes where you can try the sweet apple tea, or perhaps keep it simple and traditional with a black tea with as much sugar as you care for.

If it’s your first visit to a hamam, entering a Turkish bath can be a daunting experience – but one that cannot be missed! A chance to relax and reflect on your day whilst cleansing (you can choose if you want to wash yourself or have someone do it for you!) and you might want to branch out and go for a clay mask or a massage or one of the many other options.

8. Istanbul – the City with Vibrant Nightlife

Istanbul has got a fantastic and diverse nightlife, with lots of venues that present you an amazing night. Most of these venues are located by the Bosphorus. Istanbul’s nightlife with its abundance of choice satisfies everybody’s taste of entertainment.

Since Turkey is technically part of Europe, people always assume it’s going to be expensive to travel here. But backpackers, fear not, there are prices that match every traveller´s budget.

10. And of course Turkish Hospitality

Turkey really does have some of the most hospitable people you will ever come across! For example it is not abnormal to get offered a cuppa when entering a shop – luxury!