Home Blog Interviews with the Authors An Interview with Michael Swan 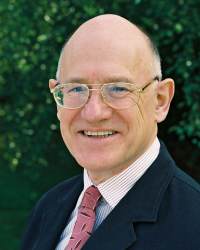 An Interview with Michael Swan

Earlier in 2015 I had the pleasure of hearing Michael Swan present at the ELT Conference in Barcelona. Being a language buff, I enjoyed listening to his gently humourous observations of what can only be loosely describe as “a single” language system i.e. the English language.

I can’t claim to read thrillers in Swedish just for the fun of it and Michael Swan, we would all agree is a great lover of language who bravely goes forth to devour a favourite thriller in a language he’s never read it in before, just to keep him happy.

Michael Swan is an award winning author of many major publications including the first reference book I acquired before my CELTA course, Practical English Usage. He has also written Basic English Usage. Other books are Grammar an introductory book on why languages need grammar and what they do with it and, co-authored with David Baker, Grammar Scan a collection of diagnostic language tests published by Oxford University Press as well as many other grammar books such as The Oxford English Grammar Course series that he co-authored with Catherine Walter.

He has written articles on topics such as the communicative approach, task-based learning, mother-tongue influence in second language acquisition, theory and applied practice in language teaching, and grammar.

If that wasn’t enough in itself, when not observing forms and changes in language, Michael jumps in the fray and mixes it up himself, being a widely published poet.

What influenced you to study language in the first place?

Natural interest, I suppose. At school I found I was attracted by languages (we did French, German and Latin), and I was quite good at learning them. So I ended up specialising in modern languages for my university entrance exams, and  this led to a degree in German. My interest in English came later. I got a job at a language school (with no training at all), found I knew nothing about my own language, and started trying to learn something. The rest is history.

What keeps you passionate about it?

As an Englishman, I’m uneasy about admitting that I’m ‘passionate’ about anything. But I am fascinated by language and languages. Language is the most complex of human creations, and one of the most beautiful (though it’s easy to miss the beauty if you have to spend too much time studying small details). I love looking at languages and seeing the different ways in which they solve the problems that languages have to solve if they are to work efficiently as means of communication. I like learning to read languages (I’m much better at reading than speaking!), and I do this by the thriller method. I find a thriller I already know in English and try to read it in, say, Italian or Swedish. After a bit I find I’m managing reasonably well. (If you know one Western European language, you can sidestep to another with a bit of work). This approach gives me a slightly one-sided knowledge of the language, of course – I can say in Italian ‘He was lying in a pool of blood’, but I don’t know how to say ‘Can you clean these trousers by Friday?’ Never mind. It keeps me happy.

As a rooky teacher I was known to say “that’s a very interesting [hairy] question Andrea, that needs time to explain – I’ll make a note of it and we’ll talk about it with more time after the break/in the next lesson”.  This would buy me time to slink off and peer into your book for the answers that were invariably there. You don’t only present explanations of grammar to save our necks in sticky situations in the classroom – but you are constantly analysing the change.

I asked you at the ELT conference in Barcelona, if you had a notebook and were you always annoying everyone around you as you quickly jotted what they had just said down. What processes do you have when analysing changes in English?

No, I don’t have a notebook of that kind. If I did, I’d probably lose it, and if I didn’t I wouldn’t be able to read my own writing. I don’t in fact need to make a lot of notes, because people mostly speak and write the way I expect them to. As far as my kind of English (standard southern British) is concerned, the on-going grammatical developments are pretty well known already: we’re not like anthropological linguists doing research on an unfamiliar language. Certainly, I notice the odd thing from time to time, and If it’s important I’ll remember it and write it down when I get home. It’s more often a matter of vocabulary than grammar, though. Watching the London marathon on TV recently, I was struck by hearing a commentator say that the women’s race was going at a ‘comparatively pedestrian pace’. What other kind of pace would you expect in a foot-race?  But clearly, ‘pedestrian’ is simply coming to mean ‘slow-moving’. The same commentator said that a single runner had made a ‘concerted move’ towards a drink station: another current meaning change.

How is English changing?

In the ways that languages always change. New discoveries and interests bring in new vocabulary, like tweet or bioprinting. Novel structures emerge to supply communicative needs or wishes: English is developing a new second person plural pronoun, you guys. Some changes seem to come in just to brighten up the language: for example the use of I was like to mean I said. Words that contribute to unimportant distinctions, like shall or whom, may die out. Complicated systems shift about: there are small changes in English modal verb usage. Or systems get simpler: some English three-form verbs are losing one of the forms, so for example shrink – shrank – shrunk is turning into shrink – shrunk – shrunk. As pronunciation changes, grammar can be affected: English spoken auxiliaries are being reduced or eliminated in speech (you better, gonna, Where you going?, What you got?). For the moment, we say these things but don’t often write them; but in 50 years – who knows? Prestige varieties influence others, so English worldwide is becoming a little more American year by year. Despite all this, we need to remember that only a very few things are changing at any one time. We’re typically struck by what’s different (like a friend’s new hairstyle), and we scarcely notice the enormous number of things that stay the same.

What have you observed in English being spoken by non-native speakers in regards to grammar and the influences of the mother-tongue of the speaker?

As all EFL teachers know, a proportion of learners’ problems with grammar can be traced back to the mother tongue. First-language patterns may be inappropriately transferred (so a learner might say ‘Can you explain me this?’ or ‘I don’t understand nothing’). Or the first language may have no equivalent of a complex English grammatical system, like the use of do to form questions and negatives. Russian or Chinese speakers have enormous problems with English articles for that reason. What people don’t always realise, though, is that the mother tongue can also give a great deal of help. European languages have a lot of basic structures in common, so that English grammar is much easier if you’re Spanish or Swedish than if you’re Japanese or Thai.

Speakers of English as a second language are going to have a big influence on the development of English as a language system. What observations have you made? For example, the impact on our present grammatical structures?

I think this is a misleading way to look at the question. It portrays the language as a monolithic system, which will be affected as a whole by developments in one part. But it’s not really like that. There are lots of Englishes, and you have to ask: whose English is likely to be affected, and by what mechanisms? Certainly second-language speakers of English have influenced the development of some local varieties: for instance Singapore, Indian or Malaysian English are all coloured by the regional mother-tongues. But speakers of one kind don’t necessarily affect the English of users who belong to another community. English has been spoken as a second language by millions of people for a couple of centuries, but as far as I can see this has had no effect at all on the grammar of my English, any more than second-language use of Spanish world-wide has affected the grammar of native speakers in Madrid.

A lot of confusion is caused by misunderstandings of the term ‘English as a lingua franca’. Some people have the illusion that lingua franca use involves a separate variety, ‘ELF’ or ‘global English’, that has its own distinct characteristics, and that is bound to influence ‘English as a whole’ (whatever that is). In fact, there is no such variety. Different non-native speakers simply produce very different forms of English. Certainly, these Englishes have a few typical points in common: tense use gets simplified, third-person -s is often dropped, articles may be left out or confused, just as has always happened in non-native English. But the few resemblances are swamped by the differences: there are effectively as many different lingua franca Englishes round the world as there are lingua franca speakers or groups. Perhaps one can imagine a scenario, in the distant future, when international communication in the media is dominated by second-language English speakers, and where prominent  communicators may influence people worldwide into adopting aspects of their usage; so perhaps we could all end up dropping third-person -s or whatever. But that’s purely speculative, and it’s certainly not happening now.

There are tensions between a communicative classroom environment where the effective communication of a person is the objective possibly at the detriment of the learning of regular structures, phonology and vocabulary. What are your thoughts about how to marry these two ends of the spectrum?

The answer depends a lot on the context and the learners’ aims, but in general both aspects are clearly important. Language practice is much more effective if students use language to communicate, and learn about, things that matter personally to them. But communication can only be efficient if learners have a command of the necessary basics. I think there are two common ways in which language teaching can go wrong. Either learners are given too much language and not enough chance to get confident in using it; or they are asked to perform communicative tasks without being given the language they need for those tasks. To get a good balance between input and output, you need to prioritise very carefully. I like to limit the input, so that I teach just structures and vocabulary that are really needed, a small amount at a time, and I make sure these are properly understood and learnt. Then I try to provide enough focused communicative practice for students to be able to internalise those language elements and use them confidently and comfortably, before moving on. This may mean doing more with less, instead of trying to cover the whole syllabus and not really teaching anything properly. As far as correctness is concerned, we should aim for accuracy where it matters, but we must avoid perfectionism: over-correction can completely destroy learners’ confidence. We want our students to have successful second-language English, not failed native-speaker English.