Everything you need to know ab...
Home Blog Interviews with Teacher Trainers An Interview with Steve Oakes – Head of Teacher Training, Budapest 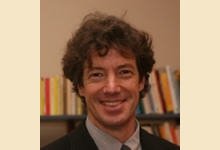 An Interview with Steve Oakes - Head of Teacher Training, Budapest

Steve Oakes is the Head of Teacher Training at the Centre in Budapest, Hungary. He arrived in Budapest back in 1991 and, as seems to be a common occurrence with Budapest, he stayed in the city and never looked back! He has worked for more than 20 years as a Teacher Trainer and currently co-tutors on Delta courses. He has even spent several years co-writing a course book, Speakout, for adults and young adults.

We've asked Steve a few questions about the CELTA and Delta courses in Budapest:

I find it particularly interesting that you were working in the film business in New York and came across TEFL – and fell in love with it immediately! Was this the first time you really became aware of teaching English as a second language?

Well, any previous encounter with TESL/TEFL was just in passing, e.g. someone mentioning that they taught English to foreigners in NYC. It didn't catch my ear or cross my mind that it would be something I'd enjoy doing.  In fact when I first went to observe a group, with the prospect of doing a bit of volunteer teaching once a week, it was more to gratify a friend's request than any real curiosity on my part.

What particularly stood out to you and made you want to leave and start a new career path?

From the first moment I saw that not only is teaching and learning first of all about human interaction, but I saw how compatible the teacher's role was with who I was. I had learned a variety of languages at that point, in a variety of ways, and I had strong feelings about 'what works' for learners both inside and outside of the classroom. It's ironic that it hadn't occurred to me to teach.  Anyway, when I watched that first group being taught the wheels started to spin in my head like they never had. And when I started to teach them (the next week), I felt I was flying. It was and is such a stimulating activity, and brings out the creativity and humanity in everyone involved, teachers and students.

You worked in Japan for a few years about 26 years ago, without necessarily needing a teaching qualification. Now that the CELTA qualification has become more prominent internationally, what advantages do CELTA Budapest graduates have over others?

Unless someone goes to work in a school with a pre-set method (á la the old Berlitz method), a typical scenario when a teacher is hired is that they are given a group at X level, perhaps a book, told where the classroom is and that's it. If someone's done a CELTA they know exactly how to proceed, how to plan the course, deal with the first lesson, create good group dynamics, plan lessons from one occasion to the next, do the necessary research to inform themselves re the language areas they're teaching, handle a range of situations that arise in the classroom, and how to develop further by reflecting on their experience.  I wouldn't say that someone without a CELTA would not be an effective teacher, but I suspect anyone would be a lot more comfortable and effective knowing all those skills I've just mentioned.

You have spent most of your teaching career training teachers. This is certainly one direction that CELTA Budapest graduates may choose to take; why did you decide to train teachers rather than continue teaching English as such?

I love doing both. I suppose that training was a sort of logical progression from 'just' teaching, and gives an opportunity to use my understanding of the language learning process in a way that affects more people. But that's not really the reason. I think that the reflective approach to teacher training which prevails as a way of developing teachers enables me to deal with the whole person-- this is inherent in the training process, and in fact training can't happen without this, it can't be done by simple 'transmission'.  I believe the same about language teaching but I suppose it's less characteristic of a majority of language learners to spend time reflecting on the process, i.e. they don't see such an activity as essential to their development. Perhaps I'm wrong about that, but I'm just trying to articulate something as close to an honest answer as possible.

The Teacher Training Centre in Budapest is also running a Delta course. Can you give us a brief description of how the students change professionally throughout the duration of a Delta course? What do many of them go on to do once they have successfully completed the course?

Yes, we run a DELTA every year from September to June, and run the Orientation Course for the Distance DELTA twice a year.  As far as how DELTA candidates change and develop over the course, it's really rather dramatic, in part because everyone finds the course extremely stimulating, and at the same time a bit of a shock to the system, in part because one is challenged by the course demands in ways that are, well, highly demanding. Candidates change in different ways of course, but generally as teachers they open up their range in terms of technique, and greatly deepen their understanding of the language learning process. Most candidates move toward becoming more reactive teachers, working less from pre-set plans and more in response to their learners' needs. But the development process doesn't stop at the end of the course, and in fact I'd say that most DELTA candidates realise and recognise their development some time in the year after completing the DELTA.

Many DELTA candidates go on to positions of greater responsibility, in educational management and teacher training for instance. The DELTA is a prerequisite for such positions in some institutions, and their seems to be a demand for DELTA-qualified teachers in different parts of the world. We’ve seen our recent ‘graduates’– mostly non-native English speakers–move on to exciting positions all over the world, working on ministry-funded projects in Malaysia, becoming a trainer on EAP courses in the UK, working as an advocate for equality in the profession, moving into a university position in the Middle East, and becoming a Director of Studies at one of the many International House language centres.

You're not the only one to move to Budapest and have such a positive feedback! We've also heard the same from a number of CELTA Budapest graduates, see http://www.studycelta.com/testimonials/budapest-celta-testimonials. Can you sum up Budapest in 3 words?

What is the employment rate like for CELTA or DELTA ?qualified English teacher currently in Budapest and surroundings?

The situation is ever-changing and always 'interesting', though as has been the case since before I came here, there is a plethora of teaching opportunities as the demand for good English teachers remains as high as ever. The bureaucracy involved in teaching in language schools-- the context most CELTA/DELTA grads 'anchor' their work life-- has become more complicated. As is the case in many countries, most teachers must work in a freelance capacity, i.e. invoice for the work they do, which is not as straightforward as working full time for an employer who simply pays you a fixed wage every month. It's also become trickier for non-EU native speakers (e.g. Americans) and non-Hungarian non-native English speakers to work here, in the first case because of legal (or not) residency, in the second case because of requirements with regard to higher education degrees. Having said that, everyone who does the CELTA here and stays seems to be able to put together a teaching schedule that supports a good lifestyle, and those who come for the course and move on remain grateful that they chose to complete the CELTA in Budapest.