The whole experience of enrolling and starting the course is really effective and immediate. The tutors get immediately in touch and all goes on board… Read more “The location is great and Lisbon is such a charming city!”

The facilities were great. Trainees had access to everything we needed. Everything was incredibly well organised and the tutors were supportive and encouraging throughout the… Read more “The tutors were absolutely amazing” 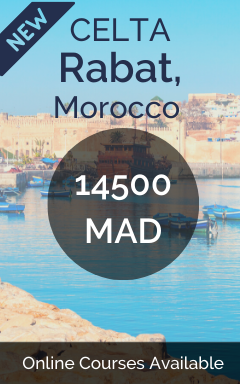 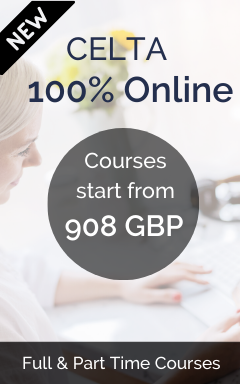 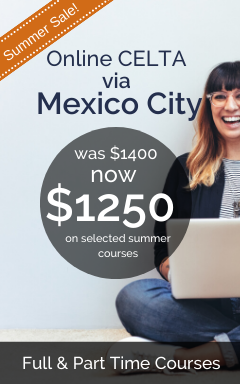 Summer Sale Online CELTA Mexico City
Home Blog CELTA and Sunsets: 10 Ways to Make the Most of Your CELTA in Lisbon 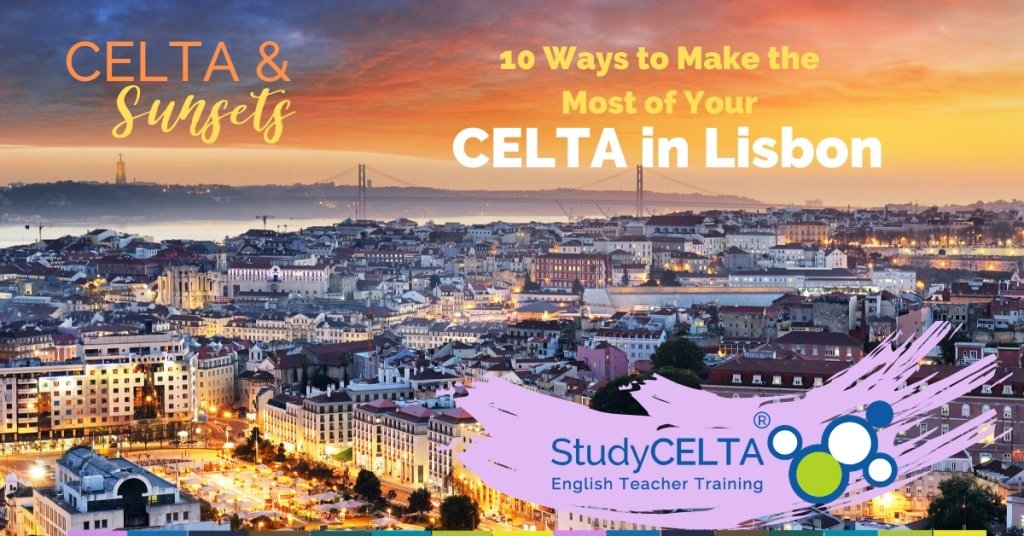 In the past few years, Lisbon has become a popular destination to live and visit. Friendly, affordable and one of Europe’s sunniest cities, this Portuguese capital is the perfect place to take the next step in your dream of becoming an English language teacher. At the CELTA centre in Lisbon, you’ll earn an internationally recognised certification with the added benefit of being surrounded by culture and history.

While the full-time course doesn’t leave much time for exploring, you’re sure to sneak in some adventures. Whether it’s before the course has started or on one of those evenings where you just need a break to reset your mind, here are some things you won’t want to miss.

Something you’ll notice about Lisbon right away is its vintage transportation system. One of the best ways to see the city is by taking one of their vintage 1930s trams. Lurching up and down Lisbon’s hilly streets on Tram 28, you’ll pass through the city’s famous neighbourhoods. Hop off at one of Lisbon’s many miradouros, or viewpoints, like Miradouro das Portas do Sol. Take in the stunning view overlooking the city’s red rooftops and the River Tejo.

Even more unique are the city’s funicular railways on the sides of some of Lisbon’s steepest hills. These have two cars that operate simultaneously as one moves down the hill and the other moves up. You can ride in them with your Vava Viagem transportation card or just watch them from the outside. With their vintage yellow and white colouring, the rare system feels straight out of a Wes Anderson film.

Praça do Comércio and the Baixa

Of course, one of Lisbon’s prominent features is the river and one of the best places to see it is the Praça do Comércio (Commerce Square). Here, you’ll find a large square opening onto the riverside surrounded by neo-classical buildings in the city’s signature shade of yellow. Take in the stunning view of the river and appreciate the 18th century architecture, all while trams rumble past.

When you’ve had your fill, head away from the river through the Arco du Rua Augusta. On the other side you’ll find the straight boulevards of the Baixa, full of restaurants, cafes and bars. Rebuilt after a devasting earthquake in the 1700s, the area is now an easy-to-navigate grid system. Here, you can do a little shopping or grab a quick coffee to fuel your CELTA in Lisbon.

When you have a little extra time, head out to Belém, about six kilometres from the city centre. In this ancient neighbourhood, you’ll find some of Lisbon’s most stunning and historic architecture in the 16th century Manueline style. This includes Belém Tower, a fortress built between 1514 and 1520 and the ceremonial entrance to Lisbon. Jutting out into the river, the imposing tower has kept watch over Lisbon since the Age of Discoveries.

Commemorating this prolific period in Portuguese history, just down the riverside from the tower is the Monument to the Discoveries. This stunning memorial looks like the prow of a ship from the side with prominent players in the Age of Discoveries looking out to the water. Built in 1960, it commemorated 500 years since the Discoveries and the square in front of it features a giant map charting out routes taken by explorers.

Finally, head away from the water to the 15th century Jerónimos Monastery. Here, you’ll find more Manueline architecture, characterised by its ornate ornamentation. When you’re done, be sure to grab a Pastéis de Nata – these tasty custard pastries were developed by monks at the Monastery in the 17th century and the recipe was sold to Fábrica de Pastéis de Belém in 1837 where you can still get the treat today!

Take in a sunset at Park

Housed on top of a multi-storey carpark, Park is the perfect place to unwind and watch the sunset. With a stunning view out to the Ponte 25 de Abril (25th of April Bridge, Lisbon’s answer to San Francisco’s Golden Gate Bridge), this is one experience you won’t want to miss. Gather your new colleagues to do some atmospheric lesson planning while watching the sunset over snacks. Be sure to grab a quick drink as the sky goes dark and the city lights up. What better way to relish that you’re working towards your goal in a city full of natural beauty and history?

When you’re in need of some quiet time to reset, head to the Calouste Gulbenkian Museum. Not far from the course’s location in Alto dos Moinhos, the museum is home to one of the largest private collections of art and antiquities. Artwork spans from Ancient Greece and Rome to the early 20th century. See mummy masks and Persian tapestries, Impressionism and Modern art.

Behind an unassuming façade on one of Lisbon’s busy streets, you’ll find Caso do Alentejo. This favourite haunt of Lisbon locals is easy to miss, but once inside, it’s hard to forget. Walk up the red carpeted stairs at the end of which you'll meet a stunning Moorish courtyard. The expansive 17th century mansion is now home to a restaurant, bar and nightclub. Wander through to admire the stunning tiles, stained glass and architecture inspired by the Alentejo region of Portugal. Be sure to grab a beer in the open-air tavern. Here, you’ll find a laid-back vibe with lots of university students from around the city. No better place to wind down after finishing your lesson planning.

Versions of the Mercado da Ribeira (River Market) have been serving Lisbon since 1100. Through many incarnations and several sites throughout the city, this market has been a bustling meeting place to buy and sell the local cuisine. The current building, in the Cais do Sodré district, was first constructed in 1882. Since then, the building itself has been expanded and redesigned.

Most recently, in 2010, TimeOut Lisboa won a competition to revamp the first floor of the market. In 2014, the Mercado da Ribeira reopened as the first ever TimeOut Market. This new incarnation of the market showcases the city’s best chefs and restaurants in a modern market hall. Lively and open, it has all of the best elements of a city market where people come together - with the added bonus of excellent food and drink. Here, you can try some of the best Lisbon has to offer while surrounded by locals and tourists alike.

Having surely used plenty of brainpower during your CELTA in Lisbon, you’ll definitely need sustenance to fuel those late nights lesson planning for teaching practice. What better way than a freshly cooked steak? You know that’s what you’ll get at Restaurante Cabaças in Bairro Alto. A hole in the wall, get there early (they reopen for dinner at 7pm) or risk waiting in line. The popular restaurant squeezes as many guests in as possible, but there is still often a queue throughout the night. The signature dish is a giant, sizzling slice of raw steak served on a piping hot stone slab. Sauces and salt to garnish as you wish, you’re able to cook the steak just as you like it – all for €10! It doesn’t get fresher than that!

This sweet cherry liqueur has been around since the 1600s and you’ll see it advertised all around Portugal. Made by infusing a Portuguese brandy called aguardente with sour cherries, sugar, and other seasonings, it is typically drunk in shot form with a cherry on the bottom. While there are many places to get Ginjinha in Lisbon, A Ginjinha Espinheira in the Praça de São Domingos was the first place to sell the liqueur in the 1800s. Just a hole in the wall (quite literally) people queue outside the counter and into the square late into the night for a taste of this sugary drink. Bottles line the windows and a convivial atmosphere sets the mood as you try one of Lisbon’s longest traditions. Give it a try even if you don’t like cherries! The flavour is unexpected and at €1.50 a pop, there’s no harm in giving this local custom a try.

Once you’ve finally accomplished your goal and finished the CELTA in Lisbon (hooray!), it’s time to slow the pace down a bit. There’s no better way to do this than a daytrip to the small town of Sintra. Just a 47-minute train ride from Lisbon’s centre, it's the best €4.50 you'll spend. This quiet town is in the middle of the Sintra Mountains and may not seem like much. However, filled with both natural and manmade beauty, it’s the perfect place to celebrate your accomplishment.

Here, you won’t want for things to do. Up on the hilltops, you’ll find both an 8th century Moorish castle and a 19th century palace. While the castle is now in ruins, you can still climb the walls to see some of the most stunning views of the surrounding area. If you’re lucky with a clear day, you can see all the way out to the Atlantic Ocean. You’ll also spy on the adjacent hill the colourful Palace of Pena. Think a Disneyland castle but real. You can also visit the Palace, exploring its different coloured sections and its sprawling park, all while being surrounded by lush forest.

Down in the town, there are restaurants and bars, yet another palace and the quirky Quinta da Regailera. Here, you can explore manmade caves, lakes, a 19th century mansion and even two inverted towers. While the town itself is quite small, there is plenty to do and it’s guaranteed to be a memorable end to your time in Lisbon!

While the most important thing you’ll get from your time in Lisbon is your CELTA certification, you’ll also have the opportunity to get to know this world class city. As you really won’t have as much time as you might like to explore the city, add some extra time on either end so you can take in all Lisbon has to offer.

The facilities were great. Trainees had access to everything we needed. Everything was incredibly well organised and the tutors were supportive and encouraging throughout the… Read more “The tutors were absolutely amazing”

Although I had taught English for several years before attending the CELTA Training Centre in Lisbon, I found that my month there working closely with… Read more “For anyone considering a career in teaching English, I cannot recommend the CELTA course enough”